LVDC Networks: Power to the People

The digital revolution has introduced innovative opportunities across several industries. In some cases, technological development clears the path for digital solutions to be adopted, changing the way society lives. This article will briefly look at one of the most promising new developments in present times: the enablers for decentralized smart grids and low voltage direct current (LVDC) networks.

The ‘AC in a DC world’ problem

When it comes to power distribution to local grids we have to go back in time. More than a hundred years ago the electric distribution system developed by Thomas Edison was designed around direct current (DC) architecture. Because of the technical limitations of the time regarding transmission capabilities, the system shifted to an alternating current (AC) model. Nowadays, the traditional distribution of power requires generating it in power plants with large capacity. The pipeline follows as this generated power is then transmitted as high voltage AC (HVAC) through overhead lines. This HVAC is then fed to substations that convert it into medium voltage AC. The substations distributes then the medium voltage to smaller regions, where it’s finally converted into a low voltage AC to supply “the last mile” of the distribution network.

Today, however, home and personal appliances (ovens, microwaves, laptops, everything) are powered by DC, which means that every time we plug in an appliance, it requires a converter to switch power from mains AC to DC to power the appliance. The problem with AC to DC conversion is that the process produces power loss of around 3% (depending on the case and equipment). Energy saving in this case is not only related to significantly economical benefits but also is relevant in a world where environmental protection is a main trend in the global agenda. Hence, if we extrapolate the volume of households connected to the grid and calculate the amount of energy lost in conversion from AC to DC, this power loss is a matter that requires addressing.

The centralized AC power model is also being challenged by the emergence of distributed power sources. Today, power is still generally generated by centralised, fossil fuel powered plants that generate AC current. As we transition from traditional fossil fuels to green energy, power is increasingly being decentralised due to the nature of alternative energy sources (solar, wind, tidal). These also produce power in DC, again raising concerns of energy efficiency if integrated into traditional AC networks. Furthermore, given the intermittent nature of alternative power generation, energy storage units (large-scale batteries like Tesla’s giant battery in Australia) must be present in the network to deliver uninterrupted power supply. These cutting edge batteries also deal with electricity in DC. As we transition away from a traditional, centralised fossil fuel based power network towards a distributed green power network, AC seems to be an increasingly unattractive investment option when considering future scenarios. 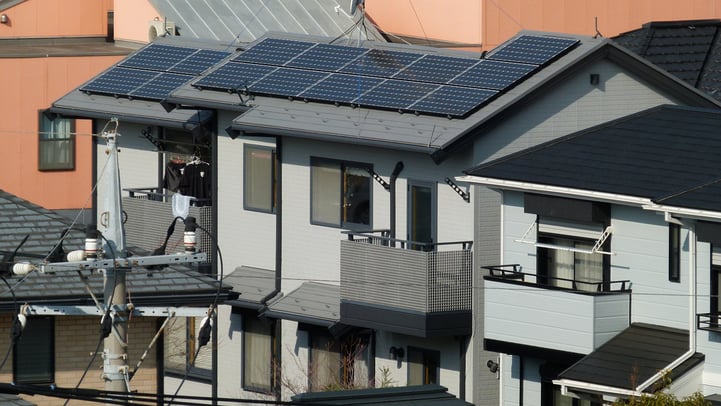 LVDC networks are an exciting and revolutionary way of addressing these problems. Low voltage DC can be defined as transmitting DC between 120V and 1,500V. This is opposed to high voltage direct current networks (HVDC) that are being explored to transmit DC current over long distances.

The immediate, obvious benefit of LVDC networks is energy efficiency. If all power was distributed in DC there would be no need for conversion from AC to DC for appliances, saving a huge amount of overall energy. With latest technical and digital advancements, voltages can now be stepped up and down for transmission, which results in a much more efficient process. In many modern office buildings DC networks are being employed instead of AC. This offers greater efficiency and lower costs as appliances can be plugged directly into the mains without conversion, but it also allows for greater control over LED lighting and the building’s climate.

The benefits of increased efficiency can also be felt on a larger scale. As we move from centralised AC fossil fuel power generation to decentralized DC alternative energy generation, DC networks will again allow for power to be loaded on and off the grid without the need to convert power. LVDC microgrids can be established at green energy sources and batteries can be seamlessly built into the networks for energy storage to provide uninterrupted power supply to recipients.

Another benefit of LVDC networks, tied with the transition towards decentralized green energy sources, is the potential to bring energy to communities who do not have access to the traditional, centralized grid. Isolated populations in developing countries would be able to build their own DC microgrids using renewable energy sources like solar, wind or tide to generate energy for their communities. These possibilities are already being explored in large developing countries like India where large portions of the country have no access to the main grid.

As well as efficiency and the transition to decentralised power generation, LVDC networks are being enabled by two other key factors: electrification and digitalization. In this case we have three trends that generate a feedback loop, which will enable in the near future a new paradigm of how the power infrastructure is deployed. Renewable energy will mean a new era of independence and accessibility via the generation of local sources of power, which comprises the efforts of the United nations to provide universal access to energy by 2030.

In the years to come within the urban landscape, smart cities will play a crucial role for an effective balance on the decentralized grid. On the one hand electric cars will also gain an important role, because by 2040, half of the cars sold are estimated to be electric. These electric vehicles will indeed be mobile energy storage units which could be actually used to benefit the grid by supplying energy when the peak demand of electricity is at its highest. On the other hand, the role of houses and buildings regarding power consumption will be redefined. At the moment, these structures act as power loads but in the future they will also become power generators. They will generate, store and consume DC power, which will be traded in and out, depending on the grid’s needs and capacity. This kind of trade will be done in scalable areas: from neighborhoods to towns or even larger perspectives. In other words, the future of power distribution will transition from a centralized top-down approach to a decentralized large number of power sources and loads that trade power with each other. This micro-trade of energy will tackle the problem of under or over-capacity of the network and could also result in something like the “internet of energy”.

Moreover, the technological advancements in the DC circuitry, which minimizes the power loss when  converting DC voltages for the different loads, is also fostering further developments on the general DC architecture. It’s important to highlight that the voltages used for DC are not the sames as the ones used in AC. As direct current begins to gain prominence, standardization for voltages and plugs/sockets become a matter of urgent attention. AC plugs for example are not compatible with DC installations. Other factors that need to be addressed are a standards for hazard protection against, for example, electric shocks.

The International Electrotechnical Commission (IEC) is working with all stakeholders involved to encourage the development of standards for the future generalized adoption of LVDC. In their studies they identify the following  markets:

Within these areas of application, our search engine SCOUT identifies some of the main companies involved in LVDC networks:

The importance of a universal standard

The develop of a universal standard for LVDC technologies will facilitate its commercialization by enabling manufacturers rely on a common platform and enable nations huge savings on energy at a global scale. In addition, policy and support from the governments will be needed to create a path for the technology to be rolled out until it manages to provide commercial returns without the need of subsidies. What standardization will bring to the table is the grounds to open the market for fair competition, which will ultimately benefit end-customers.

The digital revolution is bringing great opportunities to global economies. New combination of digital and physical technologies are enabling disruptive alternative to traditional centralized industries, a revolution that will be manifested in a more balanced shared economy. Not only it will represent a more efficient and highly profitable transition for urban development, but also decentralized DC networks will bring new chances to marginalized societies to get access to primary needs such as electricity and water. It is pertinent to say then that the promotion of a holistic development of technologies, which will drive a clean, efficient and more fair world, should be an obligation of the developed countries that carry the flag of progress.