The Russian invasion of Ukraine has caused a short-term price rise (natural gas prices have hit their highest level since 2008), but it may also accelerate our transition towards sustainability. Due to the conflict and the political consequences that it led to, governments throughout the world had to rethink and replan their current energy strategies, opening up new opportunities for renewable energy. Also known as "clean energy", it may be one of the long-term solutions to lower our dependency on Russian gas, as we will not run out of it (i.e. the sun will still be shining for ages; the wind will be blowing; and the water will be flowing). Also, renewable energy is environmentally friendly, producing no greenhouse gas emissions from fossil fuels; it’s reliable and reduces some types of air pollution, improving public health. However, there are still some obstacles to overcome; for example, solar panels and wind power heavily rely on weather conditions and the cost of production and installation processes can be quite high.

Third-Generation Photovoltaic Cells
Third-generation photovoltaic cells include the latest technologies such as perovskite solar cells, organic photovoltaics (OPVs), quantum dot solar cells, dye-sensitized solar cells (DSSCs), and copper zinc tin sulfide (CZTS). Due to their unique structure's high performance and inexpensive production costs, perovskites are thought to be the future of solar cells; the global market is expected to increase at a CAGR of 32.4%, from $0.4 billion in 2020 to $6.6 billion in 2030. The demand for quantum dot solar cells is also growing really fast and the global market is forecast to increase at a CAGR of 20.5% in the next five years.
Third-generation photovoltaic cells are definitely part of one of the world’s fastest-growing energy markets at the moment and there’s so much to explore. Below is a chart of related trends and topics to keep up with the newest developments in a matter of seconds. By clicking on one of these subjects in SCOUT, you can scroll down a list of research, patents and detailed documents relevant to your search query. For example, did you know that, with organic photovoltaic cells, the leading team from Kaunas University of Technology set a new record of 18.4% power conversion? 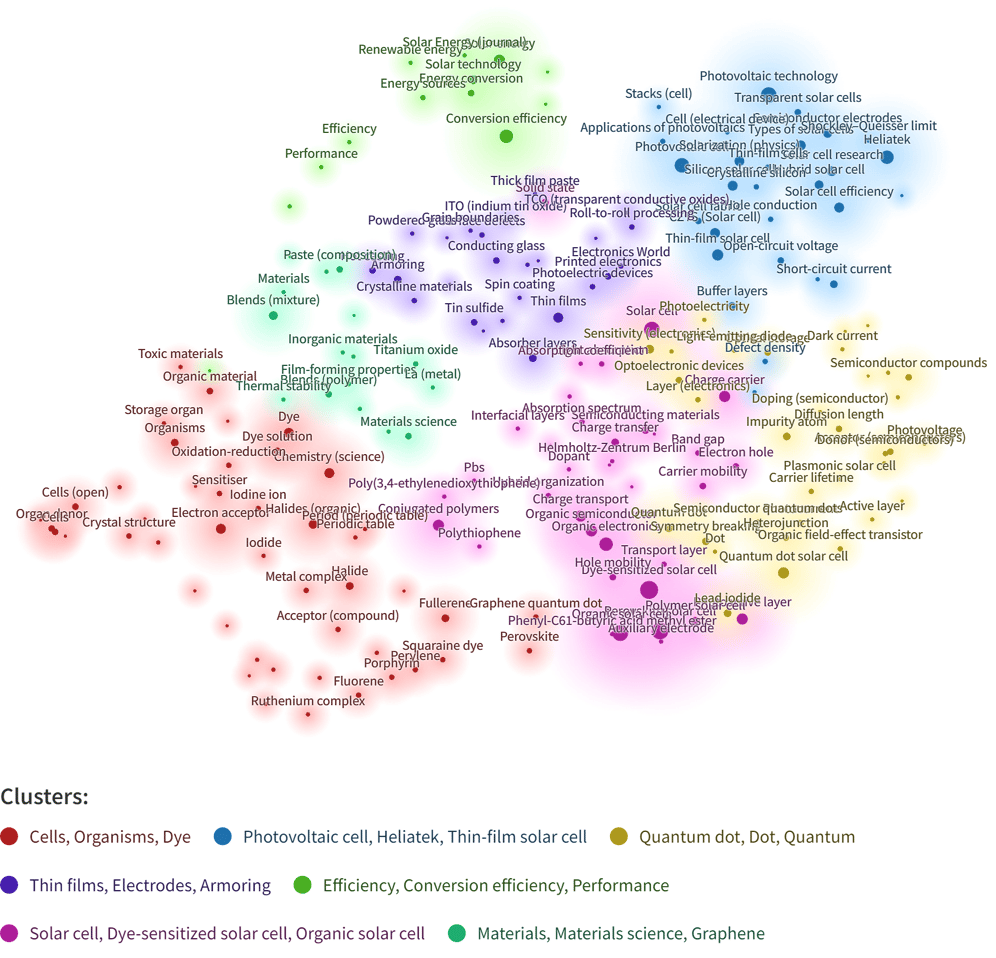 Distributed Energy Storage Systems
Using DC-charged batteries and bi-directional inverters, DES systems store energy to use it at a later moment. A key player in this field is definitely China, which has strongly invested in the development of distributed energy, setting a goal of 100 GW by the end of the decade. The US is also a top player in this field and in Europe, Switzerland, Germany and France are progressing at a very fast pace. The best companies worldwide, according to our InnovationGraph, are: 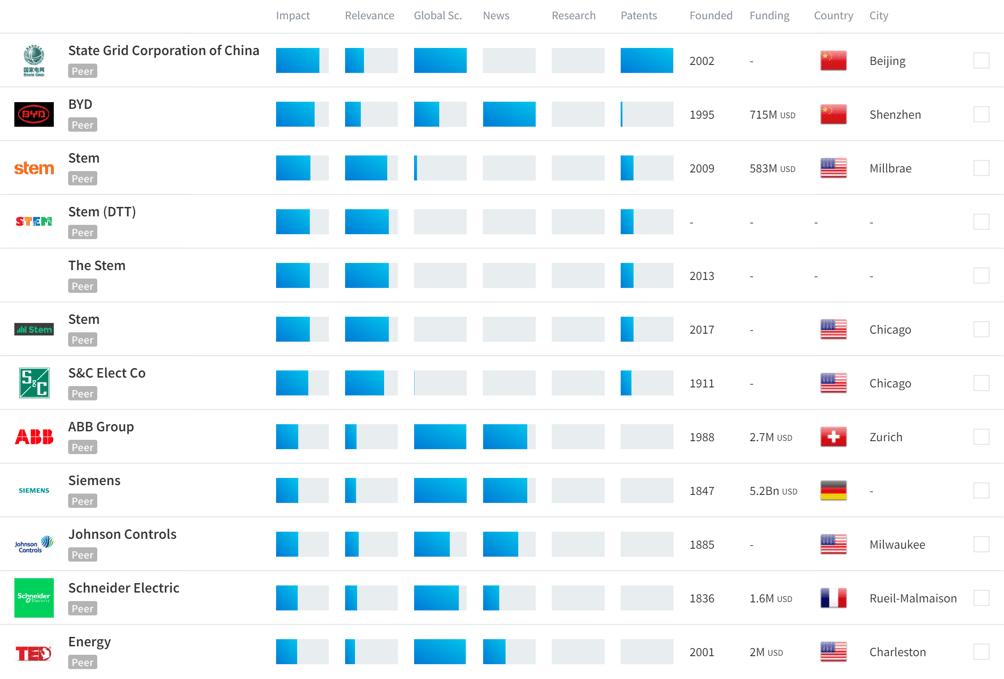 Hydro Power
Converting over 90% of available energy into electricity, hydroelectric power is expected to be one of the next big things worldwide; the International Energy Agency (IEA) indeed expects hydropower generation to rise another 50% by 2040. China is once again the leader with over 370 GW of installed capacity, and it’s followed by Brazil (109 GW), the US (102 GW), Canada (82 GW), and India (50 GW). The ongoing projects in this new trend are numerous, as shown in the Forecasts chart below. For example, Malaysia generates around 11% of the country's electricity with 6,095 MW of installed hydropower capacity, but there are 156 MW hydropower under construction. 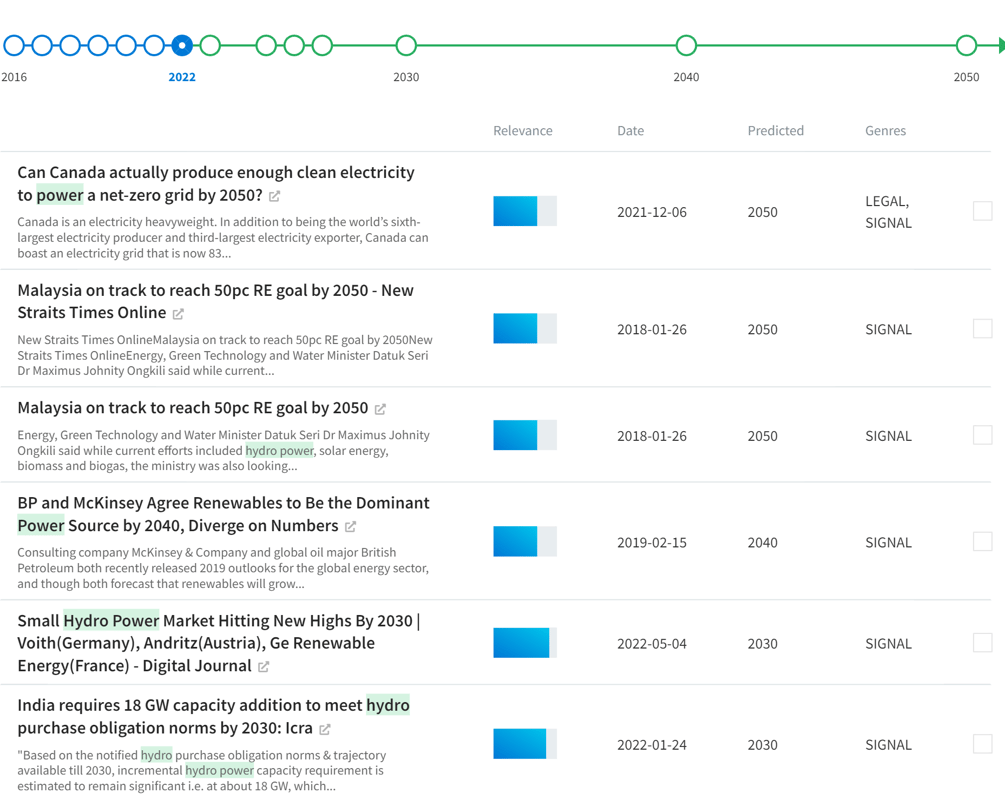 Wind Energy
Wind power capacity in Europe today stands at 220 GW. In 2020, the Netherlands added the most wind capacity, the majority of which was offshore wind. Because of its strategic location with favourable winds in the North Sea, the Dutch government set the goal of a total offshore wind power capacity of 11 GW by 2030, which would be enough to provide 8.5% of all the energy in the country and 40% of the current electricity consumption. Top national companies in this field are:

Bioenergy
In 2021, Germany was the European Union's biggest producer of solid biomass power production with 10,449 megawatts. The leader worldwide is, once again, China (with 29,753 megawatts), followed by Brazil (with 16,300 megawatts) and the US (with 13,574 megawatts). Although the COVID-19 outbreak in 2020 impacted the global biofuel demand, it’s already recovering quite fast. Indeed, by 2027, it is predicted to reach 220.4 GW, with a compound annual growth rate of more than 6.8% in just 5 years. Startups leading in this industry are: 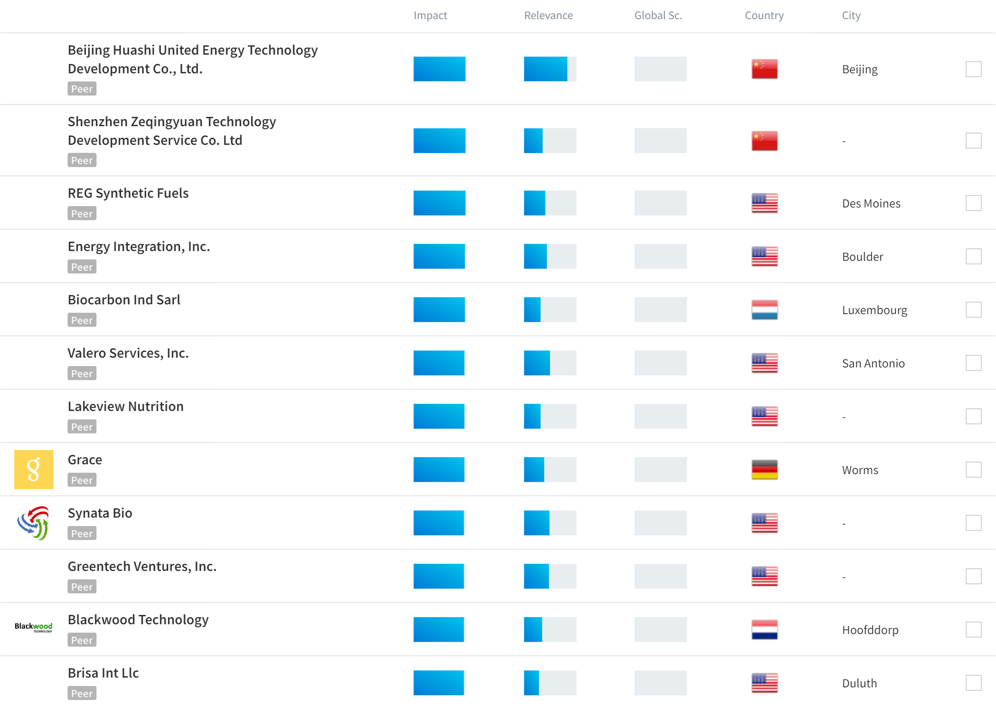 Green Hydrogen
Green hydrogen is definitely playing a major role in this green revolution worldwide: the global green hydrogen market is expected to increase at a CAGR of 54.7%, from $0.3 billion in 2020 to $9.8 billion in 2028. Produced through water electrolysis, it’s part of the new sustainable electricity production, but it still faces many challenges, including high energy losses and operational costs. Digital twins are one of the options that might aid in the design of green hydrogen facilities: by recreating a real-world product or system, digital twins improve each design to maximise return on investment whilst reducing risk. Other top technologies in this field are shown in the Trends Wordcloud below (the bigger size, the more relevant). 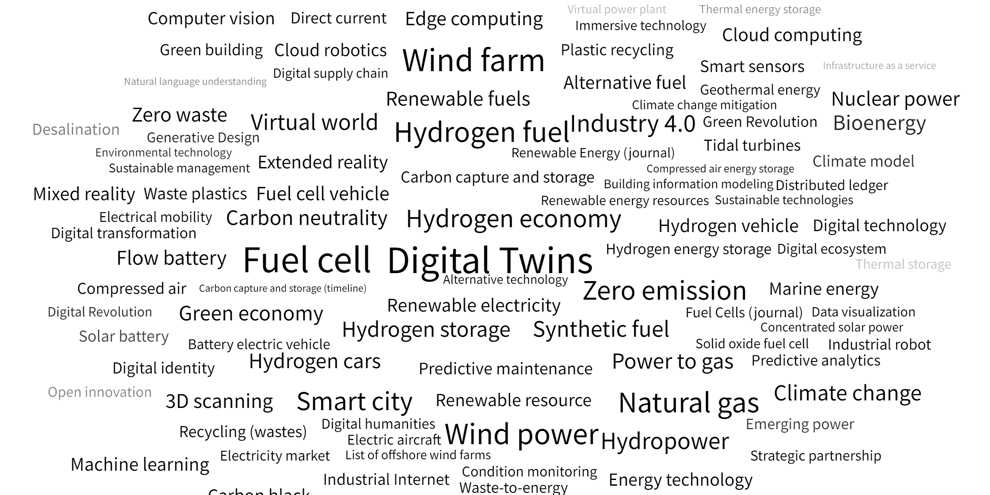 The future of renewable energy

According to the International Energy Agency (IEA), despite the rise in costs and supply chain congestion, renewable energy is expected to establish a new world record in 2022 (forecasts say 320 gigawatts), which could be equal to the European Union’s entire electricity production from natural gas. To be more specific, experts estimate that by 2026, renewable sources will account for nearly 95% of the increase in global power capacity, with solar PV accounting for more than half of that. We’re just in the beginning stages of this huge green revolution. Stay tuned for more updates on our LinkedIn profile!

References
4 technologies that are accelerating the green hydrogen revolution.

Can hydropower be part of a clean energy future?